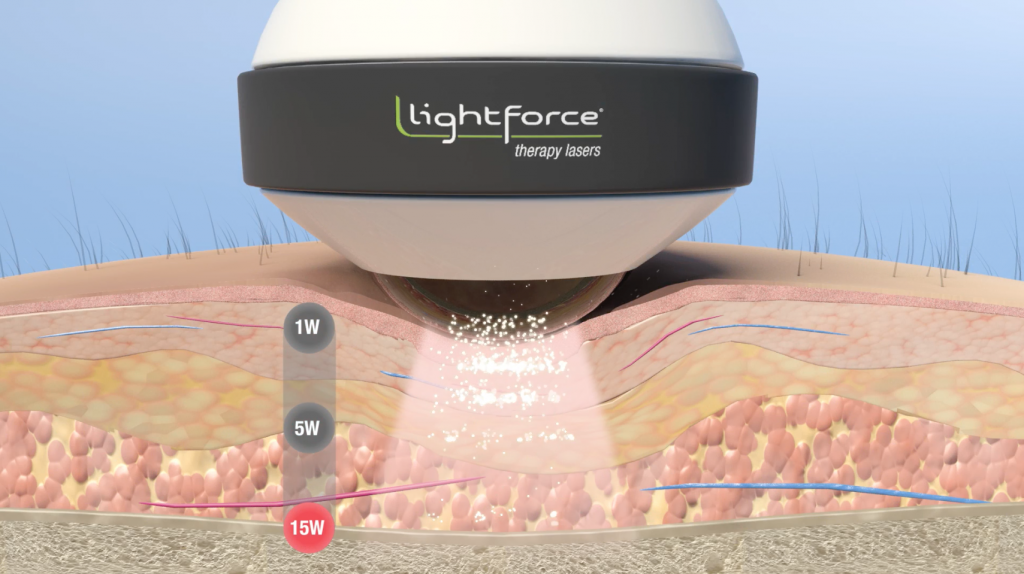 There is often confusion in the medical field when clinicians research the topic of laser. At the center of the confusion is power and its relationship to lasers’ effect on tissue, which is referred to as photobiomodulation (PBM)1.

To understand the role of power, there needs to be an understanding of its relationship to laser dosing, penetration, and how higher power lasers impact tissue(s). This two-part blog is intended to clarify some of the key terms related to the physics of laser therapy and expound on the clinical implications of treating with higher power density. But first, let’s look at a few key terms:

Photons: When any form of light is introduced to tissue, small “packets” of light called photons are emitted from the light source. At any specific wavelength of light, every photon contains exactly the same amount of energy. Think of a photon as the building block of light.

Energy: The total energy applied during treatment is the addition of all the individual photons that are emitted over a predefined period. The International System of Radiometric Units uses the joule (J) as the unit of energy to measure this property. Joules are the product of power and time.

Power is measured in watts or milliwatts and plays a key role in the total energy that is applied to tissue. Total energy (joules) by definition is the product of power (watts) and time (seconds). (J = W x s).

Therefore, increasing the power of a light source will deliver more joules of energy per unit time to a target. This plays a significant role in delivering photons to deeper tissues. A simple way to envision its importance is to think about how much light a 10 W bulb produces in a dark room vs a 100 W bulb. The more wattage the bulb emits, the more light will be present in the room. This analogy is similar to the wattage of a laser that is applied to the skin – the higher the wattage, the more “light” that is delivered into the tissue (at a given wavelength).

Now that you have more clarity on power and energy, the last important characteristic to understand is the concept of density with regard to these two terms. Density brings into account the area that is treated, and will be noted in cm2.

Power Density (W/cm2): This term describes the intensity of the light, or its “brilliance” and is referred to as irradiance in the literature. Irradiance impacts the number of photons that will be applied at depth for a given wavelength and is directly related to the heat that will be produced at the surface when a light source is applied.

Energy Density (J/cm2): Commonly referred to as fluence, it is synonymous with dosage when defining PBM treatment parameters. It defines the total amount of energy that is applied per unit area and can be influenced by increasing the time of the treatment and/or the power that is being applied from the light source. (J= W x s).
To summarize, these terms all play a role in understanding the basic physical properties of light and how it impacts PBM. With this knowledge in place, Part 2 will discuss the benefits of higher power laser therapy as it relates to 3 key treatment attributes. Stay tuned!